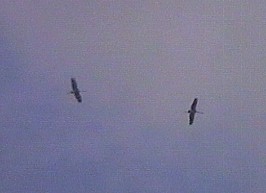 These two birds were initially seen flying over Weston Turville village on 28th April by Tim Watts who then relocated them at Broughton, near Aylesbury (about 2 miles away), just before dusk.   The birds were watched feeding at dawn the following day by a number of keen county listers but became harder to see during the morning.  The birds were finally seen circling high and flying off in the early afternoon when Dave Ferguson managed to get some flight footage on video.  There are only two previous records of this species in the county.