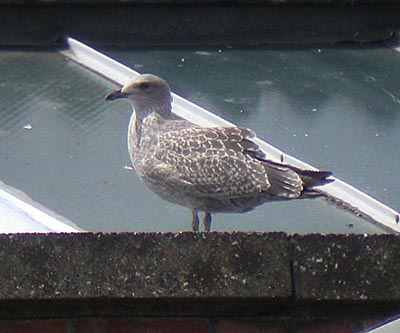 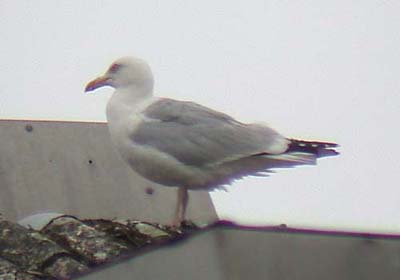 The above two pictures relate to a juvenile and one of it's parents.  The juvenile was clearly unable to fly but was actively wing flapping and following the adult along the ridge of the roof.

Lesser Black-backed and Herring Gulls have been a regular sight over the Cressex Industrial estate at High Wycombe over the last two summers.  Breeding was suspected in 2002 but the actual breeding site was not known.  During 2003 it was discovered that the birds were breeding on the roof of a disused factory in Lincoln Road.   Juveniles Herring Gulls were seen on the apex of one of the roofs in early July.  There are often 20-30 adult and sub-adult birds in the sky immediately around the breeding site, but the actual size of the colony is not known and access to the roof area is a problem.  This is the first confirmed breeding of any of the larger gull species in the county.

It is interesting that the The Atlas of Breeding Birds in Britain and Ireland 1988-1991 (BTO) shows rather few inland breeding sites for either Lesser Black-backed or Herring Gull.   However any new survey may well show a very different picture.  It will be interesting to see how this colony develops in future years.