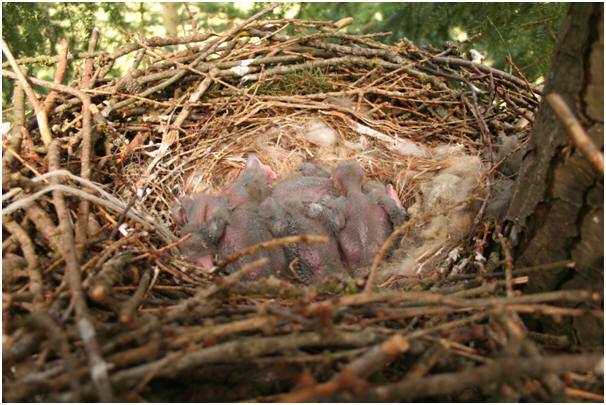 A good brood of five Raven chicks photographed on the 29th March 2009.

A new nest was built this year in an adjacent Douglas fir and slightly higher up. 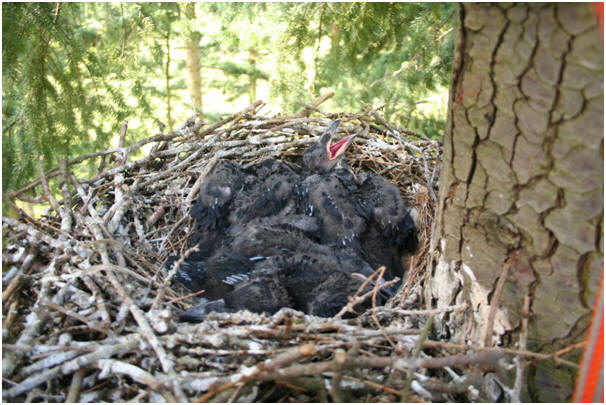 Above - This is just nine days later on the 8th of April. 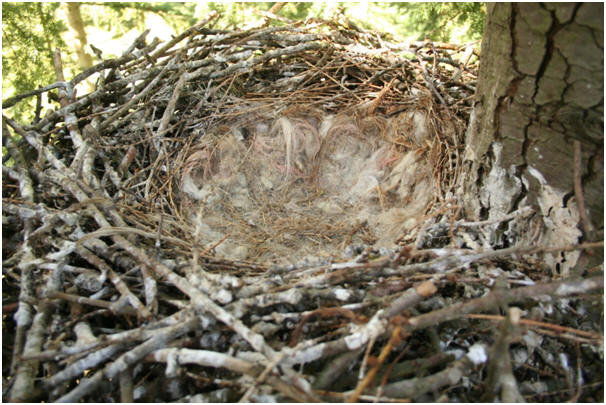 A well constructed, wool lined nest, keeps the chicks very warm and even feverishly hot to the touch 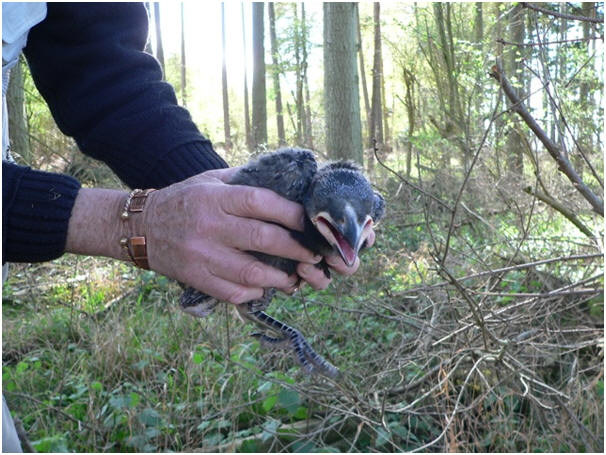 Even as nestlings these are large birds! 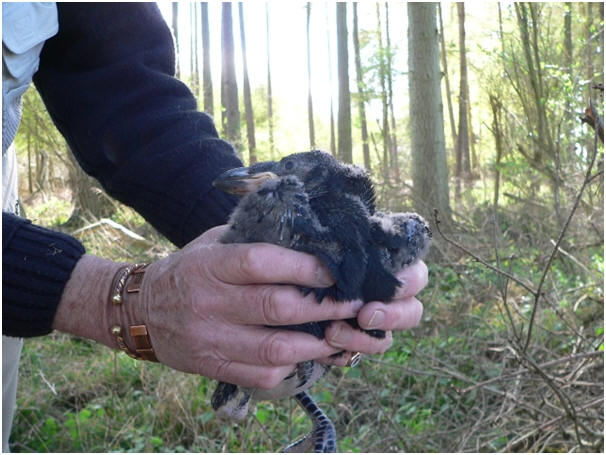 Ravens in Bucks had another good year in 2009 with ten nests producing 30+ fledged young this year. The majority are still in conifers of various species – which makes counting fledging rates rather difficult – but seem to have averaged three plus per nest. Two sites on pylons in the Vale of Aylesbury were successful and I suspect there are others waiting to be discovered. In addition to these there are 2-3, bonded pairs, along the river Thame valley that will surely settle down and breed in the next few years.

The comments above were provided by Andrew Freeman 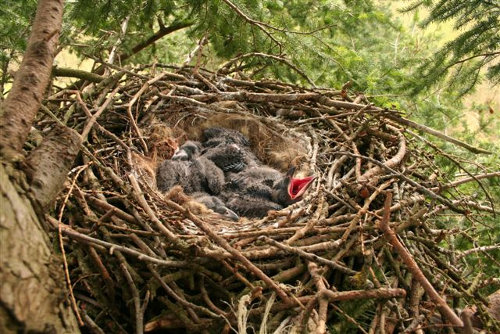 The above photo of four young Ravens in the nest was taken by local ringer Andrew Freeman at a nest site in Bucks.  The following words were provide by Andrew:

"During the re-introduction and establishment phase of the Red Kite in southern England two other bird species have re-colonized bucks – Common Buzzard, now well established and probably more numerous than kites in all but the core area of the Chilterns, and Ravens. The latter is the most recent addition to our bird life and is probably in the region of 10+ breeding pairs mainly in the Chilterns, with four pairs known to breed regularly and a further two to three in the vale of Aylesbury – all on pylons and substations. The nest sites in the vale, seem to have varying success rates, with many blowing down during the winter or even before breeding has commenced. Breeding has, however, been successful several times on pylons in the vale. The known nests in the Chilterns have been in Douglas Fir, Cedar of Lebanon, Californian Redwood and Beech – with an obvious preference for conifers being shown in this area.

The nest site pictured is in, we think, it’s fifth year in 2009 and is situated approximately, 65’ high in a Douglas Fir, north of Henley. As with most photos some of the sense of scale is lost – the nest is 3’1/2 – 4’ across and the chicks as big as chickens. When I first gained this nest, the gaping mouths sprang up, like crimson tulips hungry for meat and worms!"

The photo below was taken in 2006 and does show the relative size and shape comparison to a Common Buzzard.  Note the very rounded, almost diamond shape tail of the Raven. 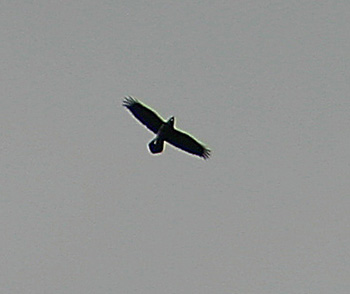 This bird was photographed over Mike's garden.  It shows the classic Raven diamond tail shape and the obvious primary feathers. 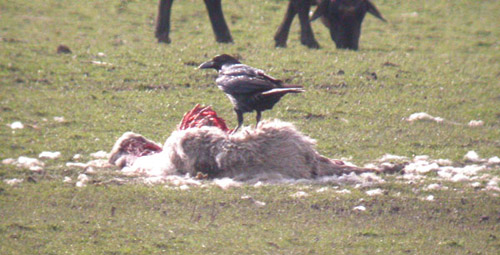 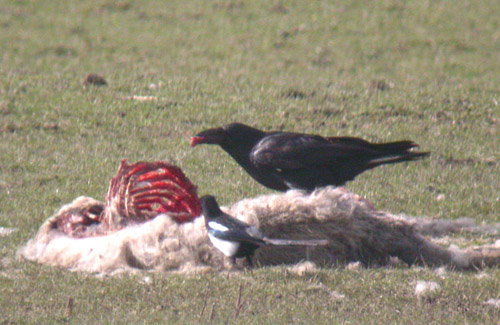 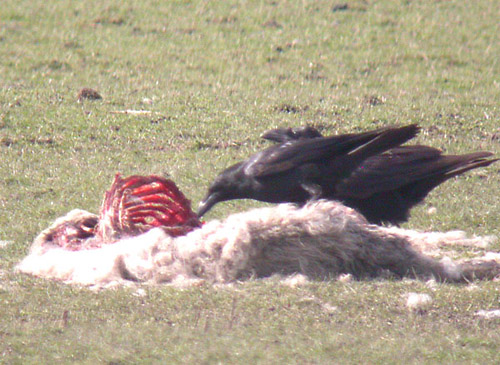 It looks as though 2007 will be a good year for the increasing population of Ravens in the county.  With a food supply of a complete sheep being available it is hardly surprising!  There have been several other sightings of this species in Mid-Bucks this Spring. 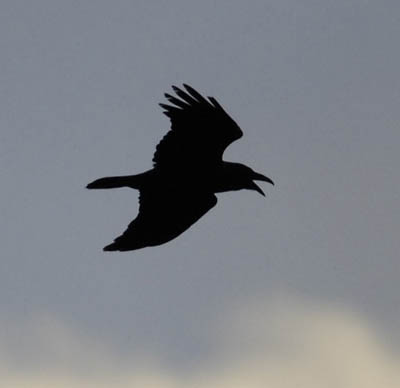 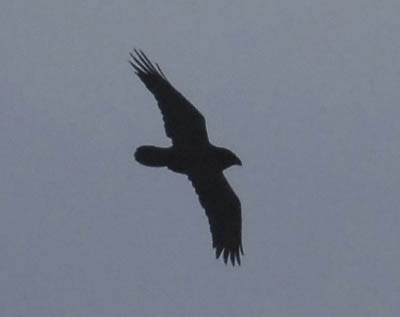 Now apparently established as a breeding bird in the Chilterns.  These flight photos show the well fingered wings and diamond shaped tail of this large corvid. 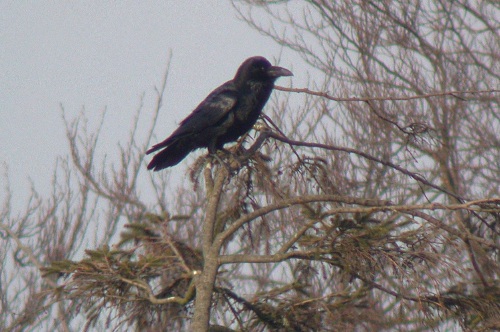 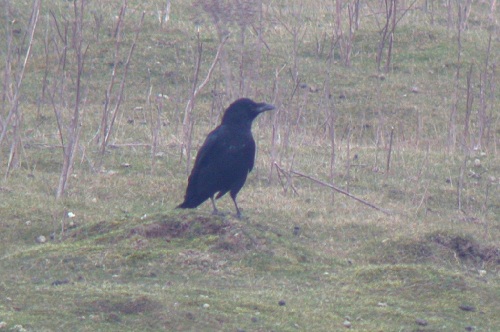 This species is being increasing seen in the county and these pictures are of a pair that were present. 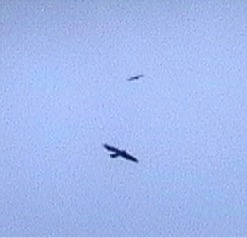 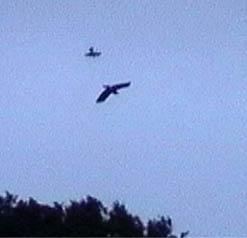 The Raven pictured above is being mobbed by a Sparrowhawk.  Apart from the huge size of the Raven, it's long tail and flat wings help to confirm ID.   The Raven was a very vagrant to Bucks with only six records up until 1998.  However since then there has been a dramatic increase in records, nearly all from along the Chiltern escarpment.  Four days after seeing this bird, Dave saw two Raven's over Coombe Hill approximately 8 miles to the SW.