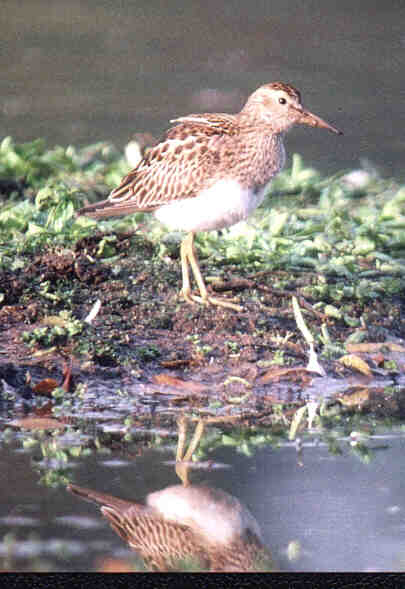 The circumstances behind the discovery of this bird are rather amusing.  On the 18th October, seven of the regular birders from Little Marlow were returning in two cars from a Bucks Bird Club weekend at Gibraltar Point, Lincolnshire when a phone call from home said that Mike Mayall had reported "Pec" at Little Marlow.  As we still had three hours driving to reach Little Marlow and only 2.5 hours of daylight left, we were somewhat gobsmacked!   Two quick phone calls to Mick McQuaid and Mike Wallen set them off to confirm the bird's identity and within the hour, confirmed it was.  (How wonderful mobile phones are! - sometimes).   The following morning at dawn all seven of us were on the bank side at Little Marlow to see the bird through rather thick mist, but see it we did.   The bird stayed for a few days, allowing Mike Wallen to take this excellent photograph and for most local birders to get an excellent county tick. - Jim Rose